We are getting ready to move out to the land and checking on it as often as we can. I have been out here for the last three days taking care of small jobs; finding someone to ‘mow’ the 2 – 4 foot grasses,  finding someone to help hook up the irrigation pump to electricity and checking on the land.
I finally had time to take a bunch of pictures of the wildflowers while my Mom and I waited to watch the fireworks (today is independence day) in town from our hill.
There is a small highway a quarter mile away and a fairly busy side road at the edge of the property that provides steady white noise, but when no one is driving by there are pretty intense sound coming from the bushes. A lot of birds, I can not yet identify and other smallish creatures fluttering around.
The flying bugs that come out at twilight have noticed us, luckily none of them seem to be mosquitoes.
See more images on Pinterest or on our Facebook page.

Yeah! We found our farm!
We bought it in January of 2014. These images are from our first trip with family to the farm. We got a lot of work done and got to finally  get into the pond and see how big it really is. One of the nephews, got to experience Ducks flying at him as he walked toward the nest. We shot a few pictures of the 11 eggs and then moved on to the middle of the pond. Brian (6’4″) and Jacob stood waist deep in water when they got to the middle. Eric and I stayed on the perimeter and took measurements.

A silly picture of Kathe (R) and Debbie (L) on our April work trip.

When we got out of the pond, we all had to go back to the hotel for a hot shower and dry clothes. Even in the first week of April, it was too cold to just hang out in the water. The house was in worse shape than we thought so we decided it would be best to rebuild. First we had to move closer to the farm.

The Eagle. The first inhabitant of the farm. And the Frog… 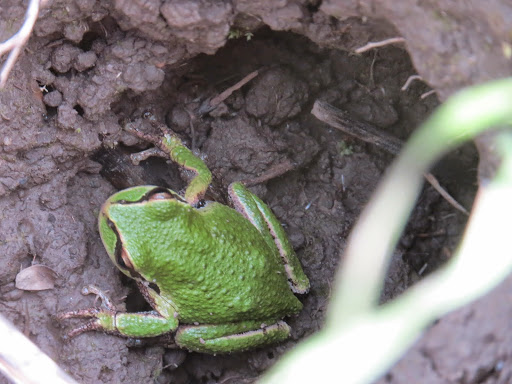 Debbie and I were excited to see what wildlife we would find. The first two animals we saw were a Frog and an Eagle, so we named the farm after them. As we had more time to explore, we found many more frogs, several kinds of birds, including a great Blue Heron, and a few snakes. We saw deer and Elk Tracks (there is a 130 head heard of Elk in the neighborhood) and smaller animals: Gophers, voles, and a Coyote. They are much harder to photograph, but when we get good pictures, we will put them on our Animals on the Farm page.

The Pond in spring